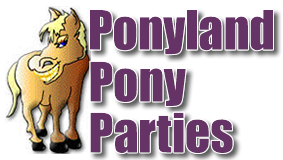 There are many ways to describe today in Ponyland.  Sad, tough, downhearted and mournful are just to name a few.  Today we did what was in the best interest of one of our animals, we helped them  cross over the rainbow bridge.  This is never an easy decision or taken lightly.  We value each and every animal that we own and their needs are our primary concern.
Today, with the veternarian's help, we allowed Midnight to cross over that bridge.  Midnight was approximately 25 years old, and the best wheel pony we have ever owned.  Chances are, if you saw Ponyland at a festival with the wheel, Midnight was on it.  She always wore purple and had her purple saddle to match.  It was a color that looked great on her and it drew hundreds of little girls to choose her every year.
Midnight was a small shetland pony who came to live at Ponyland back in 2010 and then she gave us an unexpected gift later that year by giving birth to her son, Spirit.  (see last months blog)  Over the last two years as she aged, she went into semi-retirement and only used a handful of times as she began to suffer from numerous health issues.  We met with veternarians at Cleveland Equine and came up with a plan to help her and put her on the road to recovery.  But, over this last year, it became apparent that the medication was not enough and we began to look at other ways to manage her symptoms.  She again was put on a managed plan and with the help of a great Blacksmith and her veternarians we thought we had her comfortable.  However, this last week she took a turn for the worse and really did let us know that she was hurting and ready.
As a responsible owner, one of the toughest decisions we will ever make is when to end an animals life humanely.  Usually they let us know when it's time and it's our job to be in tune with our animals to be able to do so.
It was no easy decision with Midnight.  She was always happy, nickering to her friends and happy to be outside.  She was a tough girl who didn't show she was hurting unless it was really necessary.
As I held her this morning, I talked to her about her life, the children she gave smiles too and what a good pony she was.  That I would protect her till the end and continued to let her hear my soothing voice as she crossed over the rainbow bridge.
She will be sadly missed.  After she passed, I allowed her best buddy, Coco to visit with her hoping he understood what had transpired.  I am pretty sure he did.  He sniffed her, and then sat with his head hanging over her for several minutes.  He knew his buddy was gone.  No matter what anyone says, I am convinced animals feel saddness too.  As you will see by the picture, Coco was feeling just that.
Midnight is surived by her son, Spirit, her significant other, Coco and many adopted herd mates.  RIP Midnight, you will be missed.
**Picture has been cropped for Midnight's privacy*** 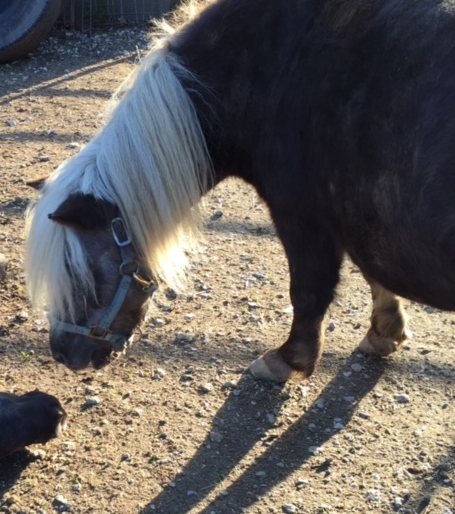